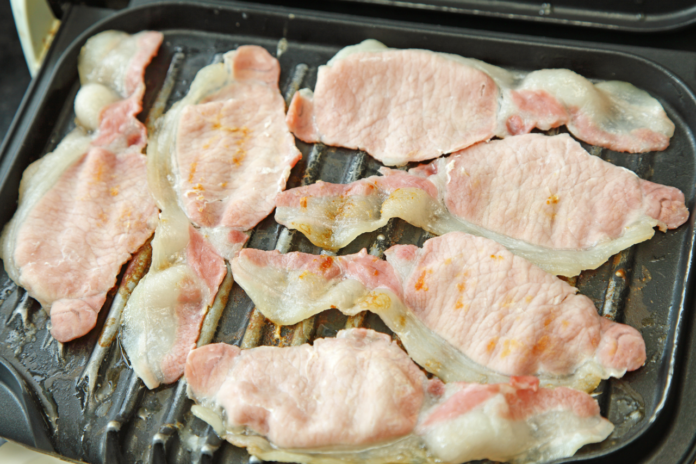 On a flat top griddle, also known as a grill, bacon is one of the most popular dishes. I’m sure you’ve cooked bacon at least once, most likely in a frying pan, if you like it. On the other hand, a griddle is a way to go if you’re frying a lot of bacon. Cooking bacon necessitates paying attention to a few aspects. It might lead you to the question, i.e. what temp to cook bacon on Griddle? If you don’t answer, this article will help you and let you all know about cooking the bacon.

Why Use Griddle Instead Of Using Frying Pan?

Typically, bacon gets fried in a pan on the stovetop. It can be a dirty process between the hot oil spitting and burning yourself. Bacon has a high-fat content, and thus when cooked, it produces a lot of greases.

This grease builds up in the pan and can spatter and burn you. Using a grill has the benefit of allowing you to cook a large amount of bacon at once. Aside from that, there are further advantages, which are as follows:

How Long Should A Gas Grill Last? Know These Signs To Replace your Gas Grill.

Follow These Steps to Cook Bacon on A Griddle

Preparation is the key to success in every endeavour, and it’s the same with bacon on a grill. Some of you may want to try frying bacon outside, and we want to make sure you have everything you need.

But first, make sure you have everything you’ll need: a grill, a silicon/wooden spatula, paper towels, water, a timer, and some plates. The only ingredients you’ll need are bacon strips, seasoning, butter, and vegetable oil. Now follow the steps below:

Preheat the grill to 300-350 degrees Fahrenheit. When you sprinkle water on the surface, you’ll know it’s hot enough. It’s critical to get the temperature just right; you want the bacon to be crispy but not overdone. You’re good to go if the water evaporates rapidly.

With tongs or a fork, start arranging the bacon strips side by side on the Griddle’s surface when it has got preheated. If you stack strips on top of each other, they will cook unevenly. It is unnecessary to use any more oil while cooking bacon; bacon has enough fat on its own, and adding too much oil is counterproductive.

Many people are perplexed as to what temperature to cook bacon on Griddle? According to popular belief, the Griddle should get set at a temperature slightly higher than the medium.

What is the best griddle temperature for bacon? It’s 325-350 degrees Fahrenheit. If you cook the bacon at an excessively high temperature, it may cook unevenly and burn. You want it to cook at a consistent temperature that permits the fat from the bacon to render gently.

Remove the strips with tongs when the bacon begins to release some of its fat and buckle and curl, then flip each slice to cook on the other side. Continue to flip and swirl the bacon to ensure equal browning.

There’s no need to keep flipping your bacon while it cooks. Allow it to cook evenly by simply turning it once, exactly like a nice steak.

A critical part of what temperature to cook bacon on Griddle is knowing when it gets finished. Bacon might take anywhere from 10 to 15 minutes to cook. Cooking time depends on the Griddle’s heat, the thickness of the rashers, and how crispy you want them to be.

When the bacon has attained the crispiness you prefer, gently take it off the Griddle with a clean set of tongs and lay it on a dish lined with paper towels. Once all of the bacon gets removed, throw additional paper towels on top to absorb any remaining bacon grease.

Tips When Cooking bacon on a griddle

There are some additional tips you need to know, which are as follow:

Several options are available, but any griddle that can heat up sufficiently to fry bacon may get used as a bacon griddle. On the other hand, a stainless-steel electric griddle that can absorb extra fat when cooking bacon might save you a lot of time and effort.

Cooked bacon is a popular breakfast option all around the world. If you enjoy it and have a griddle, don’t mess up the chance to make delectable bacon strips. Finally, keep a watch on your grills since bacon cooks quickly. Flip your burger regularly to minimize burns and even cook on both sides.

Can You Make Hamburger Helper Without Milk? Your Ultimate Guide

How Does A Dishwasher Work – Basics Of Dishwashers